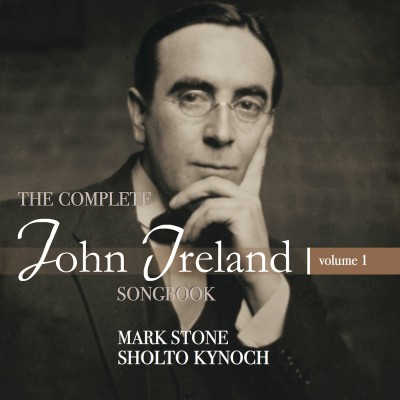 Mark Stone uses all his gifts in this splendid collection of John Ireland’s songs to bring out their varied range of expression. One might say that he treats them with the subtlety that other singers adopt when singing German Lieder. These lovely and varied songs certainly deserve it. Sensibly, Stone starts off with the best-known of all Ireland’s songs, his setting of Masefield’s ‘Sea Fever’. His speed is daringly slow but he sustains it superbly, not least on the final sustained pianissimos in each stanza, ‘And the seagulls crying’ or ‘When the long trick’s over’. The delicacy of Stone’s tonal shading is exquisite. In a vigorous song such as ‘Hope the Hornblower’, setting a poem by Henry Newbolt, the bite of Stone’s attack, matched by the accompaniment of Sholto Kynoch, is ideal, full of flair and swagger. The ordering of the songs also helps, with military songs and songs of the sea providing revealing sequences. If these songs are out of fashion, then Stone and Kynoch make them sound fresh and new. Ireland’s settings of Rupert Brooke include the most celebrated poem of all, ‘The Soldier’, simply dedicated, bringing out its form as a sonnet. Stone and his partner are particularly effective in the sharply rhythmic songs, often march-time, but it is striking how Stone can always vary his tone colours beautifully for the slow, meditative songs. Altogether a disc to leave one freshly enthusiastic about the writing of John Ireland, often strikingly supported by his idiomatic piano-writing (Gramophone)

Its virtues are very considerable indeed. Stone is blessed with a most beautiful voice, which he uses intelligently, and his words are crystal-clear … The recorded sound is excellent, as is the booklet, where you will find a measured introduction to the composer, background and descriptive notes on each song written by Stone himself, and complete song texts … The programme has been intelligently planned … Piano accompaniment is well brought out by Sholto Kynoch,  whose playing throughout the disc is of great sensitivity … This highly enjoyable collection (International Record Review)

Stone delivers it in a relaxed, slightly understated way … his performances with pianist Sholto Kynoch are models of discretion. (Guardian)

Stone has been doing very valuable work on behalf of English songs on his own label, and that continues here. Ireland’s music does not deserve the neglect it has suffered. He had a genuine melodic gift, real imagination, an excellent sense of text-setting. Many of these songs show real inspiration. The Five Songs by Turlay Royce are light ballads that he wrote under that pseudonym. These popular songs were known as “royalty ballads,” and publishers would pay famous singers to perform them. Stone’s notes point out that “Turlay Royce” is an anagram of Royalty Cure. Light they may be, but they are delightful. Ireland responded sensitively to poetry, and these songs are fine examples of a keen musical mind finding the right atmosphere to amplify and/or comment on the words of the poems, so that the music is consistently adding something of its own. Some of these songs have a strong inward-looking and intimate quality to them that can be quite gripping. In the softer and more lyrical songs, Stone’s singing is lovely. He varies his dynamics nicely … His feel for the shape of the line and his ear for shading make for some very effective and beautiful work here. The Heart’s Desire, Song from O’er the Hill, “The Soldier” (the first of the Two Songs to Poems by Rupert Brooke), and quite a few others are quite special … The overall impression with which one is left is one of satisfaction mixed with gratitude for being introduced to so many imaginative, colorful songs with a wide emotional range. (Fanfare)