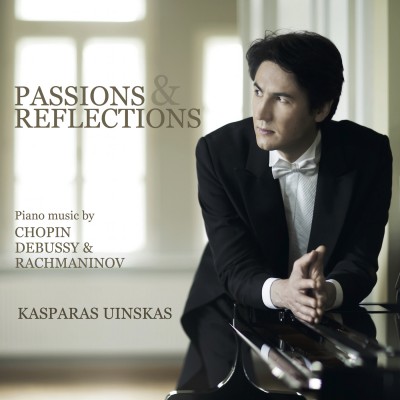 Kasparas Uinskas is an internationally acclaimed pianist, praised by critics for his virtuosity and romantic style. He has played at the world’s most important concert halls, including New York’s Carnegie Hall, Berlin Philharmonie, London Wigmore Hall, Madrid Auditorio Nacional, and Washington’s J.F. Kennedy Center, where his performances have been received to great acclaim by both the public and critics. He was born in Lithuania, and began studying the piano at the age of six. He studied at the Lithuanian Academy of Music and Theatre, where he graduated his Doctoral studies, the Frédéric Chopin Music University in Warsaw (with professor Bugaij) and The Juilliard School, New York (with the professor Kalichstein) as a recipient of the Vladimir Horowitz Scholarship. Highlights of the current season include his concerts with Royal Chamber Orchestra of Wallonia (Belgium), Lithuanian State Symphony Orchestra, North Czech Philharmonic Orchestra (Czech Republic), Philharmonie Südwestfalen (Germany), Liepaja Symphony Orchestra at Piano Stars Festival (Latvia), Krakow Philharmonic Orchestra (Poland), as well as solo recitals at the Wigmore Hall, the Baerum Kulturhus as part of the Piano Master Series (Norway), the BoZar concert hall in Brussels, the Brussels piano festival, the Festival Nordland Musikkfestuke in Bodø (Norway), and the Fantastic Pianist Series tour in Japan. He also regularly collaborates with other renowned musicians: he is appearing in a chamber recital tour of Norway and Lithuania with the International Tchaikovsky Competition laureate, violinist Nikita Boriso-Glebsky; he is undertaking a piano duo concert tour with pianist Evgeni Bozhanov; and is making a chamber concert tour with one of the world’s greatest cellists, Alexander Kniazev. He is a frequent guest at many international music festivals throughout Europe and the USA, including the Aspen Music Festival, the Music Festival of the Hamptons, the South Shore Music, and Holland Music Sessions. He has also appeared as a soloist at the Verbier Festival as recipient of the Reuter’s Grand Prix, awarded by the festival. He is a frequent guest on the Radio and TV programs, including BBC Radio 3, The New York Times classical music radio station, WQXR, and Lithuanian National Television and Radio. In 2010 he became an artistic director of the New Musical Generation summer festival and academy. He regular teaches students in masterclasses and, alongside his concert career, participates in outreach programs to promote classical music for the youth. Since 2006 he has run a classical music educational program in Lithuanian high schools, presenting live classical music to young people.