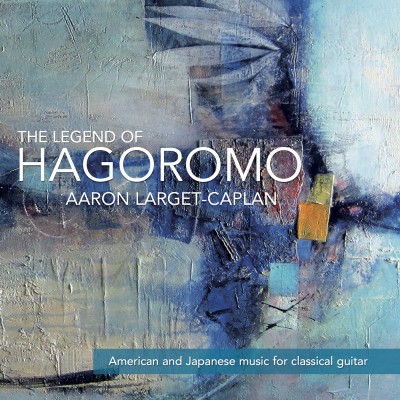 Anyone expecting the enfant terrible of modernism or the aesthetic provocateur of 4’33” will be surprised by the program on Aaron Larget-Caplan’s John Cage disc. For one thing, these are fairly early works, the most recent coming from 1948, when Cage would have been about 36 years old. After the proto-minimalist A Room, which leads the recital, there are the Three Easy Pieces, which are simply pretty pieces. Chess Pieces has a fascinating backstory. It was hidden, essentially, in plain sight in a painting by Cage, done as part of a tribute to Marcel Duchamp. (This is something of an oversimplification; Google can find you the whole story.) A bit more astringent than the easy pieces, it is still perfectly accessible … My favorite track on the disc is Dream, which is remarkably lovely and beautifully realized in the artist’s transcription …  In a Landscape, like Dreams, is very beautiful. The famous Cage of the prepared piano arrives in Bacchanale for two “prepared” guitars in which Larget-Caplan is joined by Adam Levin. It is a marvelous racket! The artist, who did all of the arrangements, is greatly to be commended for this project, for which he also provided the fascinating liner notes. (Soundboard)

In the marvelous arrangement of Bacchanale, for two prepared guitars, the raucous sounds of the instruments work very well for this exuberant work. (American Record Guide)

One scenario I yearn to witness is a quiz-master demolishing anotherwise unassailable contestant by asking him to name a work by John Cage, other than 4’33”. Possible answers are numerous, but known only to those who’ve done their homework. What Cage apparently didn’t do was compose for guitar, leaving a gap that is definitively filled by this ear-opening release from American guitarist Aaron Larget-Caplan. Drawing on Cage’s catalog for piano and prepared piano, Larget-Caplan eases the listener into the proceedings with the hypnotic soundscape of A Room, the word “minimalist” being invoked for a second time in the performer’s notes, alongside a disclaimer that “Cage did not use the term.” Whatever the genre, the two-part textures have a transparency ideally suited to the guitar. This is enhanced by Larget-Caplan’s tidy and understated playing, the feeling of brightness and focus well-captured by engineer Steve Hunt. Likewise Three Easy Pieces, in which the tonal/modal language prompts Larget-Caplan to suggest the first two pieces “could easily be mistaken for 19th century guitar compositions.” Few are likely to confuse Cage with Carulli, but the comparison is not without merit. As the album progresses, occasional sharp edges emerge, most notably in the deliciously noisy Bacchanale, arranged for two prepared guitars. However, anyone hoping this CD will perpetuate the false image of Cage as merely a purveyor of the impenetrable will leave empty-handed. (Classical Guitar)

It’s evening, the end of a busy day. Aaron Larget-Caplan’s record is spinning on my cd player while I write this notes. It’s the third or fourth time that I listen to it, without interruption. I lost the count, I looped it. For the first two plays I remained focused, I listened to all the music in succession, with concentration and attention, then I let the music flow and I started to concentrate my thoughts on what I wanted to write. Bad day today in Italy, wind, rain, high water, while I write bad weather continues to scourge my country, so it’s nice to be at home, in the evening, to write and listen to this music. Aaron Larget-Caplan did a great job: he made the first complete monograph of music by John Cage for classical guitar. Cage has never written for guitar, we know, but this doesn’t really matter to an experimenter of his level. John Cage was one of the most revolutionary musicians of the twentieth century, whose work has been able to broaden the horizons of contemporary music. His innovative spirit, that has considered music as a sound, a sound that is also silence and noise, has been of unparalleled originality. He didn’t believe in the centrality of a single philosophical culture or current, and his use of indeterminacy and chance led to a wider, global relational dimension, rich in oscillations and contaminations between different cultures. The fact that Aaron Larget-Caplan decided to “enter” the structure of Cage’s music and “convert” it for his classical guitar doesn’t detract from the composer’s vision but interpenetrates his work by giving his creations the opportunity to be examined from other points of view. I suggest this record to those who have a mainly “noisy” idea of Cage’s music. These compositions, made between 1933 and 1948 show a much more intimate and even melodic soul and can be an excellent introduction to those who want to approach for the first time to his music. Highly recommended. (NeuGuitars)

This disc, quite properly, knows no fear in its blend of delicacy, complexity and amiable simplicity (MusicWeb International)

John Cage on guitar? Why not? Though the American maverick never wrote explicitly for the instrument, some of his early piano music was adaptable enough for guitarist Aaron Larget-Caplan to arrange for his instrument. The results, out now John Cage: Guitar, are often enticing and plenty appealing. Larget-Caplan’s program consists of seven Cage pieces, all of which originated in the 1930s and ‘40s, a couple of which are remarkably prescient. The opener, A Room, for instance, anticipates the Minimalist procedures of a later generation or two. And the prepared-guitar closer, Bacchanale, sounds a couple decades younger than it is, almost like a kind of high-brow anticipation of Jimi Hendrix. In between come Cage’s Three Easy Pieces, which sound like just that: a set of short, contrapuntal exercises that exude not a little bit of charm, especially the central “Duo.” Chess Pieces and Dream are more substantial. The former is adapted from a composition that appears in a 1944 Cage painting while the latter, a ruminative essay, was originally conceived as a dance piece. In a Landscape is another affecting, resonant meditation. Then there are Six Pieces, a set of radiant miniatures for violin and guitar, in which Larget-Caplan’s joined by violinist Sharon Leventhal. Cage’s writing here is highly specific – the violin part, for instance, indicates which string each note is supposed to be played on – but the music itself is anything but restrained, ranging from the quiet ecstasy of “Melody 1” to the jaunty syncopations of “Melody 3” and the subdued glow of “Melody 6.” Larget-Caplan’s performances are excellent. Technically, he’s got everything under control, no matter how involved the arrangements get. What’s more, his playing brims with charisma and understanding: Cage can be a tough composer to really bring to life. Larget-Caplan (and Leventhal, in Six Pieces) manage the feat impressively. (The Artsfuse)