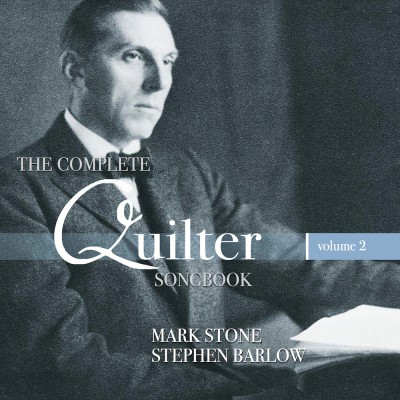 The third disc in a four-disc series that will comprise the first complete recording of the songs of Roger Quilter (1877-1953).

This is an interesting and very impressive disc, one in which Mark Stone and Stephen Barlow once again show themselves to be an excellent partnership, I have enjoyed their disc of the Butterworth songs (5060192780024), and Volume 1 of the Delius songs (5060192780062), as well as Volume 1 of the Quilter (5060192780956) all on disc; I only have a download of Volume 2 (5060192780307). Here, Stone has at times a youthful bloom to his voice whilst Stephen Barlow’s piano playing is perfectly intoned with the voice, showing what skill he has as an accompanist as well as being a very fine pianist in his own right. The recorded sound is very good, whilst the booklet notes by Mark Stone are also excellent and are akin to Graham Johnson’s in the way he introduces the composer as well as each of the songs and translates each of the songs in French and German. A thoroughly researched and well performed disc, one I have no doubt, that will give delight to any fan of Roger Quilter’s music, and of English art songs as well. (MusicWeb International)

Recorded as long ago as 2007 — production delays prompted Stone to set up his own label — the voice heard in this selection of songs and arrangements is youthful, healthy and handsome, utterly devoid of affectation in his diction and manneristic musical effects. The highlights are the popular Drink to Me Only, The Ash Grove and wistful-melancholic Irish and Scottish folk songs, but the entire programme is a tonic for the ears. (Sunday Times)

Mark Stone is in fine voice here, and you certainly do not need the printed words. Throughout he brings a lovely freshness to the vocal line, particularly in the arrangements, and throughout is sympathetically partnered by Stephen Barlow. (Planet Hugill)

Usually, in this kind of collection, I suggest that one should sample a few songs at the time. Here, I feel that the singer and pianist have thought carefully about the contents in this collection and the order of the songs; it seems to me ideal to set aside eighty minutes, a comfortable chair, possibly a drink and just soak up this life-affirming music. This disc will certainly be returning to my stereo very soon. I hope that I may have the opportunity to hear the previous volumes and look forward to the next and final volume with enthusiasm and anticipation. (MusicWeb International)

Rover Quilter was a discreet but influential presence on the English musical scene in the first decades of the 20th century. He was dogged by ill-health, and probably by the stress of his covert homosexuality. He was rich, generous, philanthropic, and was instrumental in helping Jews flee the Nazi menace in Austria. Apart from the music to a popular children’s play called Where the Rainbow Ends, his musical output was almost all songs. This CD consists of his arrangements of English, Irish, Scottish, and Welsh songs, including such traditional favourites as “Drink to me only”, “Greensleeves”, “Believe me, if all those endearing young charms”. Quilter’s arrangements have a fluent charm that Mark Stone and Stephen Barlow render with relaxed grace. And it’s worth noting Stone’s remarkable achievement – as performer, translator, liner-note writer, – and, most important of all, director of the record company which he has founded, and with which he flies the flag for underrated English music. (Independent)